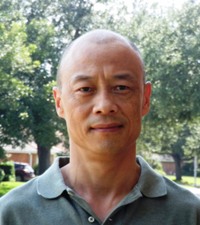 Dr. Guangdi Wang’s research has focused on the discovery of therapeutic targets by means of global proteomic analysis of diseased vs normal biospecimen and the development of small molecule drugs for cancer treatment. His laboratory has designed, synthesized and tested over three hundred novel chemical entities as selective estrogen receptor modulators (SERM) for breast cancer, anti-metastasis and vascular disrupting agents for solid tumor treatment.  Several lead compounds are in various stages of pre-clinical studies. Dr. Wang has authored 58 publications and 6 patents. He is the Principal Investigator and Program Director of Xavier’s RCMI Cancer Research Center funded by NIH for the period of 2009 to 2019 with a total fund of over $20 million. Dr. Wang was the 2013 recipient of the Norman C. Francis Excellence in Research award for a senior faculty at Xavier University.

Dr. Wang’s current LA CaTS project will evaluate the efficacy and pharmacokinetic profile of a boron-based prodrug of 4-hydroxytamoxifen as a SERM for breast cancer patients who do not respond well to first line Tamoxifen therapy. For women diagnosed with ER (+) breast cancer or using Tamoxifen for chemoprevention after a DCIS (ductal carcinoma in situ) diagnosis, de novo or intrinsic resistance to Tamoxifen therapy remains a clinical challenge. The mechanism of intrinsic resistance is not fully understood, but mounting evidence suggests that polymorphism of the cytochrome P450 enzyme CYP2D6 may account for poor initial response to Tamoxifen therapy because the enzyme is required in converting Tamoxifen into its active metabolites, 4-hydroxytamoxifen (4-OHT) and endoxifen, both of which are about 100 times more potent than Tamoxifen. Existing clinical and laboratory data support the hypothesis that bioavailable 4-OHT and endoxifen could offer improved therapeutic efficacy and potentially lower dose requirements with reduced hot flashes and other side effects. Indeed, 4-hydroxytamoxifen is being developed as a topically applied gel currently in phase II clinical trials. Endoxifen is currently being tested as an orally administered drug in two Phase I clinical trials. However, as metabolites of Tamoxifen, both 4-hydroxytamoxifen and endoxifen have rapid first-pass clearance from the body, thus are less bioavailable than Tamoxifen when orally administered. Clinical trials utilizing high dose Tamoxifen have been conducted in poor metabolizer patients in order to raise the blood levels of active metabolites. However, this increases the risk of adverse effects including hot flashes and thrombosis. Compounding the pharmacogenetic problem leading to poor metabolism of Tamoxifen, a common clinical practice to relieve side effects is the use of serotonin reuptake inhibitors (e.g., fluoxetine and paroxetine) which also strongly inhibit the cytochrome P450 enzyme CYP2D6 , resulting in lowered concentrations of 4-OHT and endoxifen in patients undergoing Tamoxifen therapy.  The boron-prodrug approach may effectively bypass genetically and pharmacologically mediated defects in Tamoxifen metabolism. This could alleviate de novo resistance to Tamoxifen by ensuring sufficient plasma levels of its active metabolites in patients with deficient CYP2D6 dependent metabolism. In addition, lower dosage holds the promise of significantly reducing side effects such as hot flash based upon available clinical evidence indicating that Tamoxifen, not its active metabolites, is mainly responsible for hot flashes. The boron-4-hydroxytamoxifen prodrug represents a substantial improvement over the current Tamoxifen-based endocrine therapy for ER positive breast cancer.