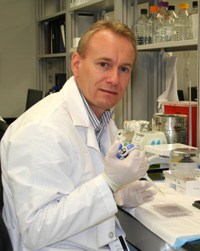 Dr. Lazartigues is currently the Joint-Programming Committee Representative of the Neural Control and Autonomic Regulation (NCAR) section of the American Physiological Society. He is a fellow of the American Heart Association, serving as peer reviewer on national study sections (Vascular Biology and Blood Pressure-Basic Sciences, and Established Investigator Award-Basic Sciences). He is part of the Angiotensin Gordon Research Conference steering committee and Associate-Editor for Cellular and Molecular Neurobiology.
Dr. Lazartigues has won several awards including the Shih-Chun Wang Young Investigator Award of the American Physiological Society in 2010 and the LSU School of Medicine Outstanding Mentor Award in 2012. He has authored 50 scientific publications, including a study recently published in Circulation Research entitled “Brain ACE2 Shedding Contributes to the Development of Neurogenic Hypertension” that laid the ground for the current LA CaTS pilot project.

Dr. Lazartigues’ research focuses on the role of the renin-angiotensin system in cardiovascular diseases, with a particular interest in hypertension and type 2 diabetes. Dr. Lazartigues’ group has identified an enzyme (ACE2) that opposes the deleterious effects of the renin-angiotensin system in the brain and pancreas of patients affected by these diseases. Current projects are centered on clarifying the therapeutic role of ACE2 as a new treatment for hypertension and diabetes.

The current LA CaTS project is aimed at establishing ACE2 as a potential biomarker of disease in drug-resistant neurogenic hypertension. Neurogenic hypertension is characterized by an exacerbated release from nerve terminals of a hormone called norepinephrine. This hormone is responsible for the constriction of blood vessels and elevated heart rate contributing to high blood pressure. While the role of the renin-angiotensin system in the brain is well known to regulate blood pressure in animal studies, investigations in patients have been limited. Therefore, the LA CaTS pilot project aims at providing evidence of ACE2 “neutralization” in the brain of hypertensive patients during the development of the disease. Data collected so far support the working hypothesis that ACE2 compensatory activity is impaired in the brain of hypertensive patients. Additional experiments are underway to restore ACE2 activity in the brain of these patients and assess the therapeutic benefits.